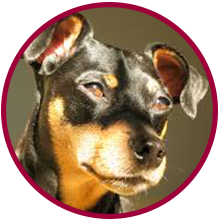 Peppi is a 10 year old entire male Miniature Pinscher who is presented for increased appetite, polydipsia and thirst. He has also put on 3kg over the last 12 month and owner is concerned over the weight gain. The owner acquired the dog in 1998 from his mother in law. There was no major problem or surgery in the past. Peppi is kept indoor mainly but do wander to the yard at times. There is 4 other dogs in the household. Peppi is fed plain rice, dry food and cooked and raw chicken normally. The last vaccination and deworming was 3 years ago. A year ago, Peppi escaped from home but was found 2 weeks later. Since then the dog health started deteriorating. Appetite, thirst and urine production have progressively increased too. His exercise tolerance has also decreased in the last two years. Peppi hind limbs have also progressively become weaker and he is sleeping most of the time now. In 2006, Peppi was tested positive when ACTH stimulation test was performed then. However, the owner did not seek treatment after that for some unknown reasons.On physical examination, these are some of the abnormalities detected. Peppi current weight is at 11.5 kg with a BCS 5/5 (extremely obese for this breed). He displayed a pot bellied abdomen. Hepatomegaly was palpated on abdominal palpation. There is obvious muscle wasting on the hindlimbs and the prostate is small on rectal palpation. Peppi also has bilateral senile nuclear sclerosis most likely due to age related changes.From a traditional Chinese medicine perspective, the tongue colour is red and swollen suggested of pathogenic heat and dampness. Pulse is rapid and forceful. Dampness can come from the environment or it can be due to poor diet or internal organ weakness. (Pitchford, 2002) As dampness accumulates in the body, it causes a disturbance in the normal Qi and blood flow, generating heat as a result of a sort of friction. (Marsden, 2006)